I travel a lot, both for work and leisure. I’m also somewhat addicted to fast mobile data, given that I use my phone for nearly everything while on the road, including streaming movies and TV. I also use Google Voice as my only phone number, so I rely on decent data coverage even for phone calls.

At home in the US, T-Mobile has served me well with “Unlimited” LTE. Granted, they deprioritize your traffic on busy towers once you are in the upper 3% of traffic (about 25G a month at the time of this writing), but I’ve never really felt much impact and it’s rare for me to use that much data in a month.

UPDATE: Since writing this, T-Mobile have rolled out T-Mobile One, which in my opinion is a much worse deal than before (tethering at 2G speed unless you pay $15 extra) and an egregious violation of net neutrality, forcing you to pay an extra $25 per month unless you want to watch all video in crappy 1980’s 480p on your 2016 superbright AMOLED 1440p phablet display.

Traveling abroad is another story. While most T-Mobile plans include free international data in over 120 countries, speeds have thus far always topped out at 128kbps, usable for chat apps and Google Maps, but inadequate for much more. This has meant reverting to a local SIM in most places I go, with rather mixed experiences:

Let’s get to the point of this post. In the past few months, two new options for fast data roaming seem to have surfaced and I was eager to try them out.

The first is T-Mobile’s Summer Unleashed, offering unlimited high-speed roaming (basically as fast as the roaming network will allow - generally LTE speeds where available) across Europe between July 1st and August 31st. It is unfortunate this applies only to Europe and is limited to this summer, but some are speculating this may just be a trial period, with a potentially global offering to follow soon as T-Mobile seeks to differentiate itself further as the most roaming-friendly US provider.

The other major development is Google’s Project FI bumping its roaming speeds (previously limited to 256kbps in the same 120 countries at T-Mobile) to high-speed LTE. Data still comes out of your allowance (at $10/gigabyte) wherever you roam. While Fi unfortunately does not offer any unlimited data options, $10 per gigabyte of high speed data abroad is still great value. There’s no trial period here either, high speed roaming has been live since early July.

I was keen to try these two new options during my trip to Europe (Germany, Spain, Greece) this August, and figured I’d post some results here in case they’re helpful to others.

I had a five hour layover at FRA and decided to do some speed testing while hanging out in an airport lounge. I used both the Ookla Speedtest app on my Nexus 6p, as well as Netflix’s great fast.com speed testing site. I tend to prefer the latter since the former is often whitelisted by network providers, yielding unrealistic results. Unfortunately, fast.com does not give upload or ping results.

As soon as I landed in Frankfurt, I got a text from T-Mobile informing me of the unlimited roaming speeds in Europe during the summer. I fired up fast.com and the Ookla speedtest app immediately, and was quickly impressed: 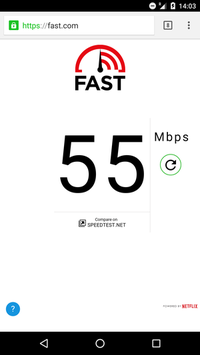 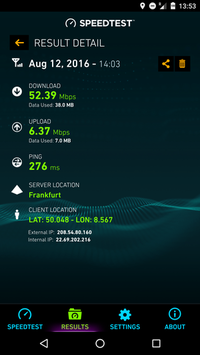 55Mbps is faster than I generally get at home on T-Mobile’s own LTE network back in the US (though I’ve topped out north of 100Mbps a few times). The upload speeds seem to be lower than back home. Ping times were quite significant (250-400ms), suggesting there’s a round-trip to the US and back involved in routing when you are roaming abroad. I feared this might be an issue with voice, particularly Hangouts calling, which I use for everything. However, phone calls to the US were just fine, certainly not worse in terms of delay than regular international calling.

I found that`it takes a while for the connection to ramp up during the speed tests. It’s likely due to TCP windowing and slow start, which could perhaps be helped by some stack tweaking, but is no big deal in daily usage. Subjectively, I watched some youtube and, apart from a few extra seconds buffering, video at 720p/60 and even 1080p was completey watchable, including jumping around in the video.

Another interesting thing is that the IP assigned to me while roaming geolocates to a US T-Mobile IP. I.e. there’s likely some sort of transparent VPN involved in the roaming process, which would explain the large latency values.

I popped in my Project Fi SIM next, and the results were similarly pleasing: 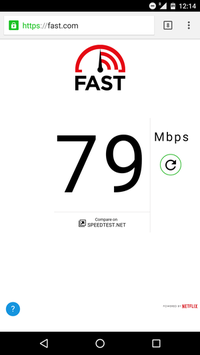 Over subsequent testing, I found the speeds to be very similar to the T-Mobile speeds, which is not surprising given that T-Mobile is the international roaming partner for Project Fi, meaning you end up roaming on the same networks T-Mobile has agreements with. The exception here is the separate roaming agreement Fi seems to have with Three across Europe, which may eventually make it the preferred option just from a speed perspective.

A big plus with Project Fi is that tethering is absolutely allowed while roaming, at no additional cost and without limit (you still get charged $10/gigabyte as usual). T-Mobile does not have this, and I’ve found it invaluable for working remotely abroad.

A few days in Ibiza were next. Once I arrived, I ran both fast.com and Ookla speed test again, with similar results as before. 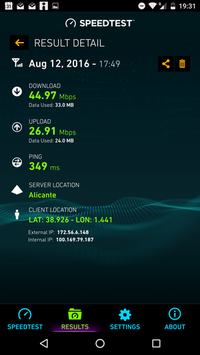 Speeds here varied from ~20Mbps to up to 60Mbps, with solid upload speeds as well. Roaming seemed to be on Movistar and coverage was great all across the island. 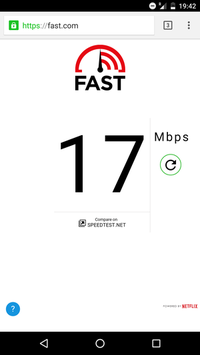 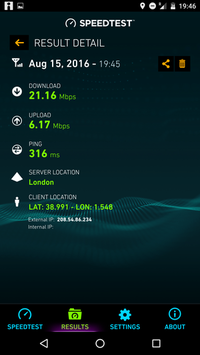 Project Fi delivered nearly identical speeds (the example shown here was captured in a more remote location than the T-Mobile one), again likely because it uses the same roaming partners, although your phone just says “Fi Network” rather than the guest network name. I made several Google Voice calls to local numbers and the US using both T-Mobile and Fi and quality was great!

My speed tests in Greece were from a rather more remote location, yielding somewhat lower speeds than elsewhere. However, most of the roaming took place on CosmOTE and cursory testing at Athens airport suggested downloads north of 40Mpbs in places with decent towers. 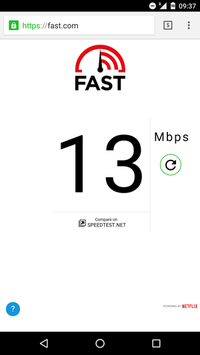 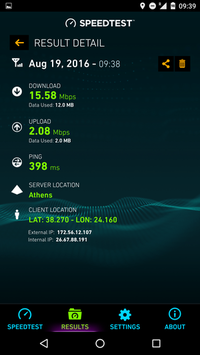 Again, very decent speeds given I was in a tiny village on an island. Perfectly adequate for everything from browing to youtube to movies to Hangouts voice and video calling. 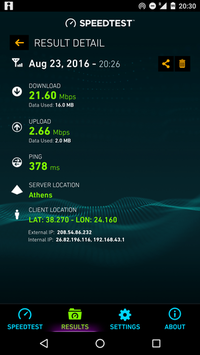 Very similar results with Google Fi again, roaming on the same network as T-Mobile. I made plenty of use of the wireless hotspot capability on my Nexus 6p and using a laptop to code, watch movies or browse the web felt great, the high-ish ping barely noticeable.

It feels like we’re finally at the point where you can get reliable, fast international data roaming pretty much anywhere in the developed world at a decent price. This is exciting, making it much easier to stay in touch or work anywhere you please.

Given that many providers still charge ridiculous fees for (slow) daily international roaming (hello Verizon, $10 a day?), Project Fi’s flat fee structure no matter where you are seems like a great deal. I’d wholeheartedly recommend it, if you’re able to get it (you need a US billing and shipping address at the moment). Also note that you don’t necessarily need a Google Fi compatible phone, either. If you’re content with data-only, you can just order an extra data-SIM in addition to the primary voice+data one, all free of charge (I think you can get up to 10 of them).

I hope T-Mobile starts to include LTE roaming in their plans on a permanent basis, but given their recent price hikes and general un-un-carrier-like behavior, I doubt it.